Does the term ‘Village Fête’ bring up images of homemade cake and chutney stalls, a tombola, coconut shies, and a display of Morris Dancing? Well then maybe you need to check one out in France. Summer fêtes in the French Alps are quite different. After a few summers spent here, I can highly recommend attending these odd and wonderful celebrations.

Summer Fêtes in the French Alps

Over the summer months almost every village has its own fête – La Tania, Courchevel Le Praz, Courchevel Village (1550), Courchevel Moriond (1650), and that’s just some on this side of the mountain. There are also national celebrations, such as the Fête de la Musique and of course Bastille Day.

Fête de la Musique falls on the 21st June, and marks the beginning of summer for many villages around here. Bars and restaurants start to re-open after the end of winter break, and the weather is just starting to heat up properly. There is likely to be a few live bands on, but in a large town like Annecy, you can find all kinds of buskers, duos, school bands, troupes and groups performing every kind of music you can think of, interspersed around the town and the lake. 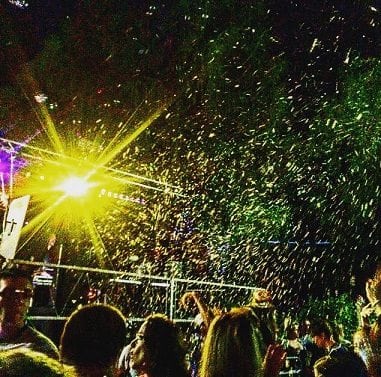 Bastille Day, or La Fête Nationale as it’s known in France, is of course THE national festival. Weeknight or not, there will be a party in every village across the land come July 14th, and it’s very likely that it will go on until dawn. This year I went the party in Bozel, and it did not disappoint. If you have been to Courchevel in winter, you may be aware of Bozel as a quiet village a little further away from the action. Well in summertime the lake becomes a hive of activity, particularly on a fete night!

The whole lake area was swarming with people, and the lake bar had a DJ and several extra beer stands dotted around the packed-out terrace for easy access to alcohol. Needless to say the bar usually closes the following evening in order for the staff to catch up on their sleep.

Next up is probably my favourite; the Fête de la Madelon, in Le Praz, Courchevel, usually falls a week or two after the Bastille Day celebrations. The whole village becomes one large bar and dining area for the weekend, with different shows in the centre throughout the day. As you move towards the lake there are stalls selling local crafts and produce (so a bit like a standard British Fête), and various activities and displays for the young and old. On Saturday night, villagers can eat soup that has been cooked in a large cauldron in the centre, and then dance the night away until around 5am. 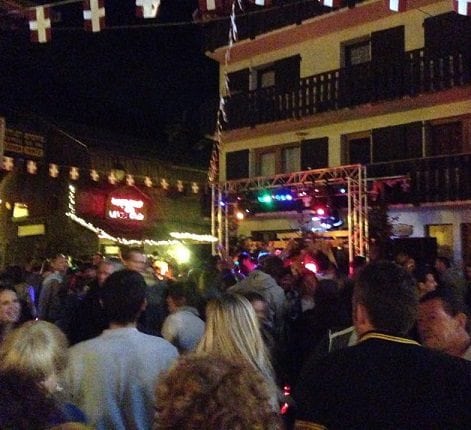 The whole villages fills up with people from noon until, well, dawn sometimes

Meanwhile across the valley, the Fete de Saint-Jacques in Villemartin is usually on the same weekend. Villemartin is quite literally on the opposite side of the valley from Le Praz, and again this is a 2 day fete with similar events (my favourite being a Ninja Warrior-style challenge amongst the villages, climbing a large wooden structure with a stick!), although the partying usually carries on through Sunday night into early Monday morning. 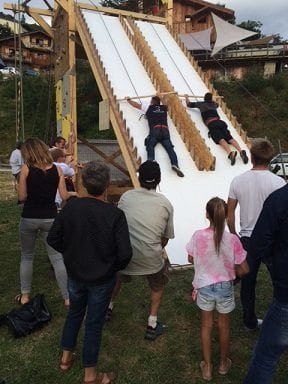 Competition between the villagers on a Ninja warrior style wall

And just when you thought that was it, there’s a also collection of other fêtes and events in between, just for good measure – my favourites include the Fête du Bucheron in La Tania, a Lumberjack Championship contest where you could lose an eye if you get too close to the action, and the Summer Ski Jump Grand Prix here in Le Praz.

Couple any of these summer fêtes in the French Alps with the abundance of other activities available, and you can have yourselves a splendid time in the Alps in summer.